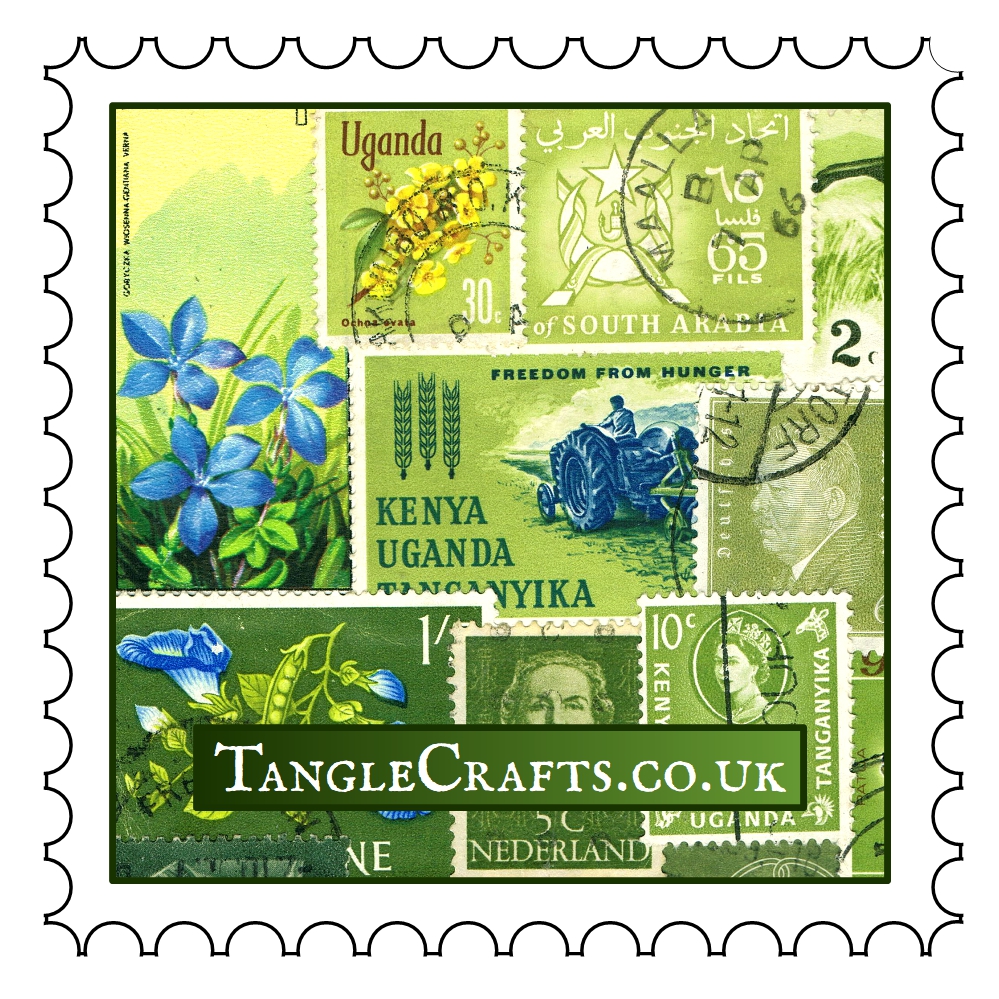 In a recent post, I claimed that the stamp woven in the corner of this ‘letter’ was my first handwoven faux postage.  Who knew?  Turns out I was wrong…!  I just re-discovered an old post of mine from 2010 in which I wove a postage stamp on a tiny matchbox loom!

I had completely forgotten about this, but really need to try it again – it would totally be possible to embroider a little detail onto the surface of this tiny weaving…

Ironically, this miniature weaving probably took as long to complete as the handwoven postcards I have talked about recently, due to the fine embroidery threads used instead of bulkier knitting wools.  It would be possible to weave a quicker stamp using a bulkier yarn or thread, though – it would just afford less opportunity for adding finer detail.

In my office, I have drawer of ‘potentially useful stuff’ (or as Corey would prefer to call it, tat).  The contents range from postcards to pencils, doorstops to stones, from ribbon to a plate rack.  Today I was looking in the drawer for inspiration, and I found it!  Today I saw French knitting looms…:

I used to have a French knitting doll; you know the type.  Mine was called a Knitting Nancy.  I’ve also seen them called knitting spools, knitting reels, etc.  Traditionally, they are one of the ultimate re-purposed or at least handmade craft tools.  Back in the days before all cotton reels were made out of plastic, they were made out of wood; and in those days, french knitting dolls were made very simply by hammering 4 nails into the top of the wooden reel.

I wanted to make a French knitter, but it’s impossible to get the wooden reels, any more (unless you are willing to pay ridiculously high price on an auction site).  However, my drawer of potentially useful stuff yielded all kinds of interesting possibilities, and I have spent a happy Sunday morning trying them out.

Once you start thinking laterally, there are literally tonnes of everyday things you could potentially make a French knitter from.  For my first experiment, I used a doorstop, with 4 push pins pushed into the top around the hole, spaced at regular intervals.

The pins pushed in easily, but were held securely.  I used an ordinary paperclip with the outer ‘leg’ bent down into a straight line to hook the yarn over the pins.  The hole in the centre of the door stop narrows off to approx. 5mm diameter at the bottom, but the cord that was knitted expanded to ‘normal’ size once it came through.  A normal double knitting yarn or a thick embroidery cotton would fit through without a problem.

For my second experiment, I wanted to see how the size of the centre hole affected the thickness of the cord. I used a reel of brown insulation tape (I don’t think the colour of the tape matters, except perhaps aesthetically) with a central hole of approx. 3cm.  I didn’t use the tape up first, by the way (that’s still available for a future occasion); it doesn’t really make much difference either way.  My advice would be to push the pins into the inner cardboard ring, though, as when pushed into the tape they move about more.  Using 4 pins, the cord was about the same thickness as the door stop cord, but a much looser knit, because of the hole’s diameter (and therefore the wider spacing of the pins).  The cord was not as sturdy as the first cord, but if you especially wanted a looser, lacier effect, wider spacing of pins around a larger hole is the way forward.

For my third experiment, I used the insulation tape knitter again, but pushed in an additional 4 pins, spaced roughly 1 cm apart around the centre hole.  It was fascinating watching a real web build up between the pins, and it was obviously going to be a much closer knit than the previous experiment.   The resulting cord was far more obviously tubular than the previous cords.  The knitting looked like the finger of a glove (prompting me to ponder on the usefulness of ‘gloveless fingers’ as a substitute for fingerless gloves…).  The knit was just a standard tension, not especially tight or loose, just ‘normal’.

Conclusion: It is the spacing (and therefore number) of pegs that affects the diameter of the cord, rather than the size of the hole itself.  4 pegs would produce roughly the same diameter cord whether knitted through a 5mm or 5cm hole, but the knit would be looser, the more widely spaced the pegs are.  The larger the centre hole, the more pegs can be used, and therefore the diameter of the ‘cord’ increases accordingly  – and the less cord-like it becomes.

The tubular aspect of the third experiment prompts me to imagine all kinds of possibilities.  If you used a larger reel of tape as the loom, you could knit a drawstring coin pouch very easily.  Or if you knitted a VERY long cord, a tubular scarf.  If you found a much larger circle to use as a loom, and used a strong, non-elastic, yarn (maybe string, or garden twine?), you could knit a seamless shopping bag!

I have also previously made a successful knitter using the plastic centre of a cash till roll, with 4 paper clips clipped around the top edge.  The paper clips were held in place surprisingly firmly by a single covering of sellotape.  So if you don’t have push pins to hand, but you do have paperclips, you could try taping them around the inner circle of a reel of tape, instead.

Another thought: you could cut the base of a disposable drinking cup, and cut notches (like the turrets of a castle) along the rim to make a different sized knitter.   Honestly, if you think about it, you can use almost anything!

ATCs (Artist Trading Cards, to the uninitiated!) are something that have intrigued me for a while.  The concept is simple: an artist decorates a card (specifically sized 2.5″ x 3.5″), adds their contact details and any other information they want to, to the reverse, and then trades (never sells) this card with other artists.  It’s a highly personalised business card, in a way, building a community feeling among artists.  But also a huge online community has sprung up, creating and trading ATCs – and just in case I’ve given the wrong impression, this is a world open to any crafter/artist, not just ‘professionals’.

I think ATCs are a wonderful creative outlet.  They allow you to try out different techniques on a small scale, and the mixed-media cards I’ve seen can be quite stunning.  It’s one of those all-encompassing ideas that means whatever background you have, or medium you work with, you can play, too!  But I guess it’s the fact of communication, and the fact that it’s a personal, not mass-produced/commercial thing that makes it feel like a little oasis.

Although not commercial in the sense of trading rather than selling the cards, an industry has sprung up selling related materials to decorate and store your ATCs, and cool stuff like labels and rubber stamps to add your details to the reverse.  Being me, of course, I just look at the labels and then make my own.  I had the idea for a woven ATC, and while working on a design for the reverse, came up with a way to make a loom directly out of your ATC blank.  As I speak, I’m having rubber stamps custom made.  At the craft fair, I will have funky little (alterable) tins containing an ATC kit, with ATC blanks,  2 different ATC backs, needle, ‘shed stick’, instructions, etc.  You may have noticed, I’m really pleased with this idea.  I just want to get people weaving (another post will be coming shortly with more DIY ideas), and ATCs are a brilliant, sample-sized way to get people hooked!

This was my prototype ATC. I also have a slicker image as an option for the reverse, eradicating the tape measures; and a far simpler, more meditative weaving, currently half-complete.

In addition to the ATC kit, I will be (literally) giving away an ATC loom as my business card – the front has all my contact details, the back has instructions to turn the card into a loom.  The weaver, of course, is not obliged to mke an ATC, if they don’t want to; they also have the option of just slipping the weaving from the (re-usable) card once complete, and framing/mounting as they choose.

I can’t claim that weaving an ATC is an incredibly original idea, but it’s certainly not common.  Putting the concept out there in the hands of a wider audience of creative types, though, opens up all sorts of possibilities for combining weaving with ther media.  I think it’s just something that hasn’t really crossed people’s minds, but once the idea is there, it’s a very viable, adaptable option.  I’ll leave it up to the ATC community to explore further…!

The only person I currently know who is experimenting with woven ATCs is artist/tapestry weaver Laurie o’ Neill.  You can see her processes and some completed cards here.  I love this idea for using ‘thrums’

as an ATC background.  I’ve been using thrums to stuff the little Oddballs I’ve woven for the fair.  I think this is a far more decorative use for them, though, and you can still be just as creative with exploring colour combinations.