As you can see from my recent posts, my collages are often inspired by the juxtaposition of a couple of stamps that have been discovered at random while sorting through a larger batch.  By happy coincidence, they might have similar colours or other features in common END_OF_DOCUMENT_TOKEN_TO_BE_REPLACED

In case the collage in my last post was a little too saccharine for some, allow me to temper that glorious technicolour landscape by sharing another, slightly moodier (and unintentionally darker!) collage… END_OF_DOCUMENT_TOKEN_TO_BE_REPLACED

It began with a blank notebook, and 2 stamps which serendipitously turned up while I was sorting through a large batch of old stamps. END_OF_DOCUMENT_TOKEN_TO_BE_REPLACED

Whether slightly flawed or torn or simply too common, the stamps which find their way into my collages are primarily from the philatelists’ reject pile – END_OF_DOCUMENT_TOKEN_TO_BE_REPLACED

Once upon a time, my life was not swamped beneath a sea of vintage postage stamps – but in these halcyon days of perpetual collage, I have only the vaguest recollection of those times… END_OF_DOCUMENT_TOKEN_TO_BE_REPLACED

The lovely Britta (of JaguarSnail) has found yet another potential faux postage perforation solution for us to try and I, for one, am sold!

While rummaging in a junk/antique shop recently Britta came across a pair of rusty, slightly odd-looking scissors with teeth on one side, where the blade would normally be.  When she asked what they were for, she was told they were thinning shears, used in hairdressing.  Who knew?!  (Not us, but probably many other people in the world…)  Anyway, I tried out Britta’s shears and they did indeed make neat-if-square-ish perforations which tore off nicely, so I immediately ordered a cheap pair of (new!) thinning shears to try for myself.

Mine arrived this morning, and when I tested them out, not only did they make a lovely perforated edge to my new artistamps, but they separated them in the same swift movement, without any need for tearing!  (I’m assuming Britta’s shears only pierced holes because they had been dulled slightly with with age and use.)

I’ve just made a new series of artistamps, printed on self-adhesive label paper, using my most recent postage stamp collages as background images.  Here I’ve done a comparison test, first using a serrated pattern tracing wheel to tear off a stamp, and second using the thinning shears (not shown to scale!).

The auto-separation of the paper after using the shears means that rather than pre-perforating a whole sheet of stamps to tear off as needed, I will be cutting off one stamp at a time, but I like the clean edging so much, I’m pretty sure I can live with that compromise!

I designed the sheet of artistamps from notebook covers collaged in July.  This is my first notebook collage of August in a combination of some of my favourite colours: an imaginary landscape which only narrowly missed the window of joining the artistamps above!  Check out the TangleStore listing for more details.

For more info about faux postage/artistamps, please see my Faux Postage Q & A page, plus all of these previous posts!

As has frequently been the case in Derby of late, yesterday afternoon was of the rainy persuasion.  What to do with such a damp occasion?  Another crafternoon with Britta (JaguarSnail), of course!  I was mostly on the production line, folding envelopes in anticipation of a new version of the TangleClub to be introduced in June, making address labels to include as extras with craft fair goody bags, and then unwinding with a couple of new collaged notebooks.

Colours for this one chosen by Britta

Colours for this one chosen by me! 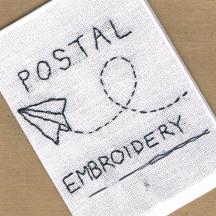 Britta was working on a couple of embroidery samples from her new mini zine (coming soon to a TangleStore near you – but not quite yet!); then while I collaged, Britta drew me in action, using her new copic marker pens.  She was filling up gaps in an old sketchbook from her university days, hence the JaguarSnail trial business card shown (with personal info inelegantly edited out by yours truly) to the left of the drawing.  Flattered though I am by the portrait, I’m afraid it does err to the flattering side & my face is definitely not quite so hollow-cheeked…  The hair looks great, though!

Britta was having a ridiculously creative day, and after using some of my excess stamps to trial a little postal patchwork, she then took a different direction with them, and made this oh-so-awesome envelope design:

I love this ‘doodle’ so much!  I immediately scanned it, then printed out a sheet as labels, so that Britta can actually mail them (the original being trapped on a tea-stained page within the afore-mentioned sketchbook). Thinking of adding them as a label set to the TangleStore – what do you think?

I should have had even more of Britta’s mail art to show you, as she brought along a whole batch of pre-artified envelopes, ready for me to list in the TangleStore.  But I noticed (far too late in the day) that she had not signed her work, so they have temporarily left the building again, to return in the near future inc. JaguarSnail maker’s mark.

Yep, there was an awful lot of craft (and art!) afoot in Tangledom yesterday, and there’s still so much more to come!  I have new projects coming out of my ears, so please keep an eye on the TangleStore, Twitter, and of course here on the blog for all the latest updates. 🙂

This post is really more of a ‘show-and-tell’ for one of the notebooks I included in my last post’s mini gallery.  I was so pleased with the way it turned out that I decided it justified having a little more of a showcase:

The pattern began as an expansion of the pinwheel motif on the mini notebook shown right, but when expanded it takes on all new qualities.  The pinwheels combine to produce new illusions – diamond shaped colour-blocks, and an overall prismatic effect.  I realise quilters (etc) are probably quite familiar with how this process works, but it’s a lot of fun to see in action, especially when you don’t know in advance what the overall effect will be.  I love the way the colours play/bounce off each other; would be interesting to experiment with multi-tones of a single colour family, too…

Today I took a short break from Etsying in order to actually make my mum a handmade Mother’s Day card for once.   I know my overseas readers don’t need to think about this just yet, but over here in the UK, Mothering Sunday is this weekend, so I was cutting it a bit fine!

The pattern is mostly abstract, but if you look at it the right way, it does actually spell out MUM (in quite angular, blocky letters!) – follow the pink/purple from left to right…can you see it?  Not incredibly obvious, I concede, but my mum will like the colour combination, regardless! 😉  I added an insert of cream coloured lokta paper inside, to give it a touch more ‘finish’.  Now all I need to do is get it into the hands of the lovely Royal Mail (before they put their prices up, on Monday!).

Give or take a bout of flu, I feel like I’ve been on the production line for the last few weeks non-stop – same old story: too many ideas, too little time!   See mini gallery below for a sampling of new collaged notebooks (in varying sizes), some very prismatic rainbow postal patchwork, and a glimmer of Springtime in the end-of-winter weather led me back to the Secret Garden, with new zines, DIY seed packets & more.

Not to mention some gorgeous wolfish notebooks from Britta’s latest hand-carved stamp.

Hop on over to the TangleStore & take advantage of a 15% discount using coupon code MADMARCH at Etsy checkout – only valid for a few more days! (coupon expires March 31st) 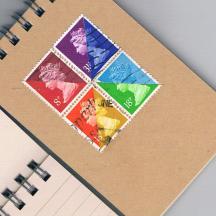 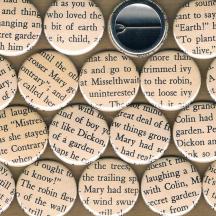 I hadn’t planned on any further Postal Patchwork experiments just yet,

but I had a reason to sneak this one in between some other projects.  I’m about to disappear off to Ireland for a few days to visit my aunt, who is also my godmother (I call her my Fairy Godmother, although I’m not sure how much she appreciates that…) and wanted to take a small gift with me.  So I chose greens for the Emerald Isle (and also because I’m pretty sure she is fond of greens) and pieced together this little notebook for her.

This notebook is obviously not for sale; however, this particular patchwork design used halves of 18 different stamps (which means I have 18 matching halves remaining) and thus its inverse twin will probably become available not long after my return.  I’m also seeing that almost-tree shape as a potential future Christmas card design (perhaps contrasted against a splash of red)…